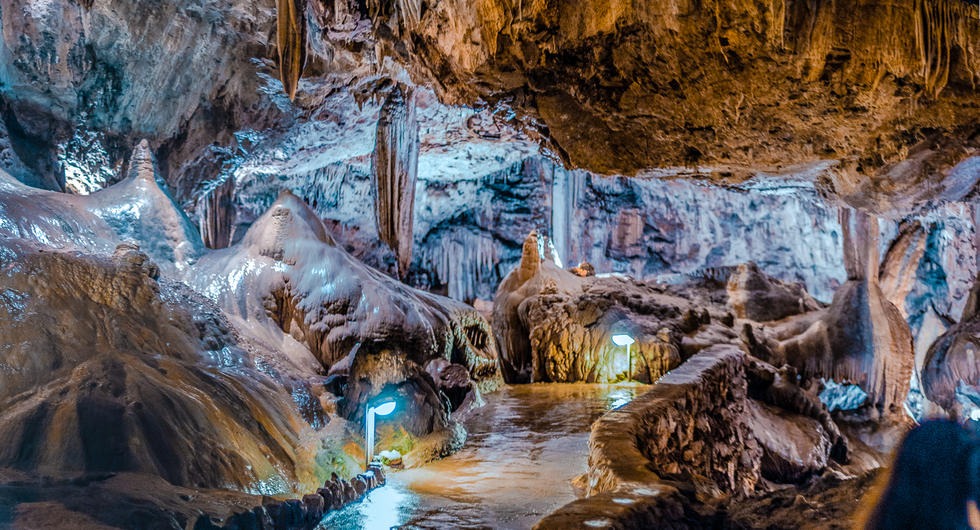 The Valporquero Caves It is located north of the province of Leon, 49km from León (Spain), near the town of Valporquero de Torio, municipality of Vegacervera and 47 Km far from Leon. Open to the public 1966 It is managed by the Diputación de León.

The visitable route, of 1.300 meters long, runs six rooms that are gaining in complexity and diversity of geological formations, from the room small wonders until the final of the wonders.

The room small wonders is the first of the visitable rooms preceded by an artificially illuminated lake. The tourist route around this room by steep stairs. The rock formations have received multiple names by tourists according to resemble one or the other, It's the most famous elements “The Twins”, “The Tower of Pisa”, “The organ”, “The Bath of Diana” and the “Madonna with Child”.

It is the largest of the rooms that you can visit; counting on 5.600 square meters and 20 meters high. As still be close to the outside, formations are irrelevant and few in number. The room is circular, hence it's name, and it's crossed by the river, it transmits only in rainy season.1

Access to the third room, the fairies, It's performed by a road that runs parallel to the river to a small viewpoint. This viewpoint to a summit that gathers the waters of the river looks, hitherto ran parallel, after a fall 15 meters; It's therefore a connection to non visitable cave area, the “Water course”. Waterfalls present during rainy season however disappear in the summertime, water seeping through the pores of the rock.

The fourth room owes its present state to a series of landslides and sediment that caused the partial plugging. The visitable route runs through a floor of stalagmites covered under a roof full of stalactites turn blackish color. The disordered arrangement of rock formations earned him the name Stalactitic cemetery.

As you move the way, the room, limestone walls, narrows, serving to protect the adjacent room; the “Gran vía”.

Despite it's name, the great road is narrow width, with 8 meters wide; but nevertheless, highlights its height 40 meters. Although there is little geological formations, that there are enormous, with stalactites of several meters in length. At the end of the room, the ground sinks in search of lower galleries, contacting the actual course of the river.

Of all the formations of the great road, this emphasizes solitary column, located almost in the center of the room. It's a training mode column from floor to ceiling amounts lost among hundreds of stalactites.

It's the most comprehensive of room 6 you can visit when geological formations which has more and more varied. The roof is full of stalactites of various sizes and colors. In this room unpublished formations found in the rest of the cave, eccentric, macaroni, standard bearers and a whole host of speleothems cluttering the environment dabbing the cavity. All this led by a small underground lake, the Lake Wonderland.

After this room the way back is done.